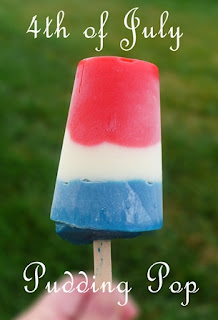 What dessert to make for the 4th of July has been on my mind for a few weeks now.  I have thought of several different things but none of them sounded that great too me.  Then I stumbled upon several pictures of pudding pops.  And I thought, “Hey I have never made pudding pops before and it would be easy enough to dye pudding to make them red white and blue for an Independence Day dessert.”  So that is what my daughter and I made this weekend.

We had plans for a couple friends to come over and BBQ this weekend so I thought it would be a great time to try them out and see if the kids liked pudding pops and well they did, but I am sure you are not surprised by that.

The only hiccup we had for this project was figuring out what to make them in.  We finally decided to just use some kids drink cups (we found a pack of 4 at Target for under a dollar).  The pops were pretty big and my friend that came over suggested Dixie cups.  I think they would work great just might be a little small, but you can make these in any size you want so you can pick what you want to make them in. 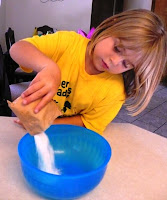 Separate your pudding into three bowls, and add red food color to one bowl and blue to the other (keep one bowl white, no color)

Pour some of your red pudding into your cups, then pour the white, and finish with the blue.  Then add your Popsicle stick.

Put your cups in the freezer till pudding is frozen (we left ours in overnight).

When ready to remove from cups place the cups in some warm water for a few seconds and your 4th of July pudding pops should POP right out.
Now eat and enjoy!
Unknown at 5:33 AM
Share